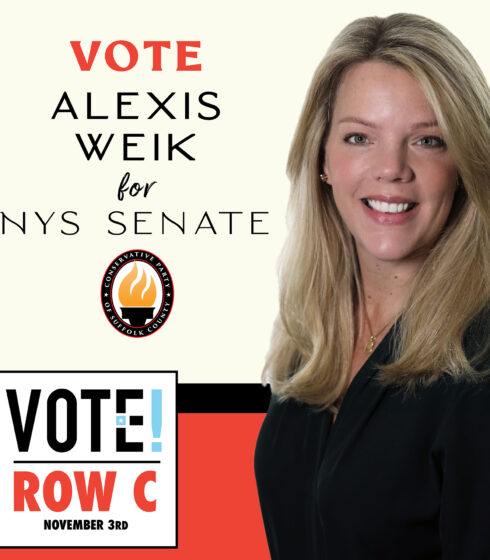 Right now, government is lacking in two things: common sense and a commitment to improving our communities. Alexis Weik has defined herself, time and again, by possessing both. Alexis Weik has spent her life as a part of our communities. She grew up in Ronkonkoma and Oakdale. She graduated from Connetquot High School. Like so many of our residents, she successfully pursued college degrees at SUNY Farmingdale and Dowling College. But for Alexis Weik, Suffolk County is more than just a place where she grew up. It’s a place she knows, loves and actively works to improve each and every day.

In 2011, Alexis began her tenure as Islip Receiver of Taxes and immediately got to work making the office better reflect the values and character of the community the office serves. She maintains a strong open-door policy, ensuring that anyone who needs to meet with her and discuss urgent matters can easily do so. Alexis streamlined the operations of the Receiver’s office, making it more accessible, more efficient and more accountable to taxpayers.

For the past 26 years, Alexis has lived in Sayville and three children with her husband, a Suffolk County Police Officer. She’s pitched in as an active participant in making their neighborhoods more vibrant spaces. During the recovery from Hurricane Sandy, Alexis volunteered with the Sayville Community Ambulance and created, organized, volunteered and supervised Greater Islip Cares. Each and every year, she donates and installs American flags along American Legion Way for American Legion Smith-Weaver Post, Sayville.

As Receiver of Taxes and an active, engaged member of her community, Alexis Weik has heard our concerns. She’s heard about continually rising taxes and a decline in the quality of services we receive. She’s heard about the insane policies coming out of the State Senate that provide taxpayer-funded perks to illegal immigrants and bail “reform” that lets dangerous criminals back out onto the streets. Now, Alexis Weik is running for State Senate to restore some common sense to how our government operates and improve our quality of life. That means prioritizing the needs of our hardworking families and small business owners over the needs of lawbreakers and special interests. It also means making Suffolk County more affordable and ensuring we receive the high quality of resources and services we deserve.

Most importantly, Alexis is running to listen to what matters most to you and be the active, engaged representative we need.